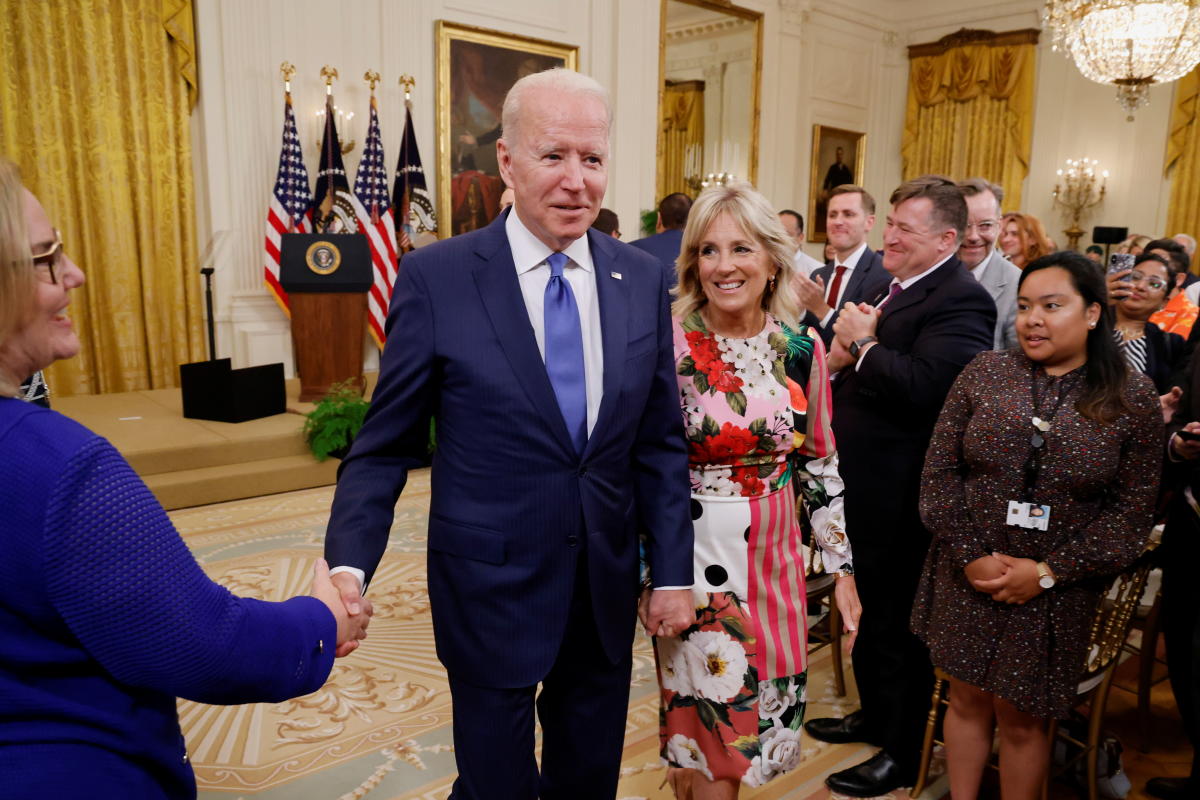 President Joe Biden issued an executive order this week to protect queer people from a wave of anti-LGBTQ legislation in states that have targeted their rights and freedoms.

“My message to all the young people: Just be you,” Biden said while signing the order on Wednesday, the same day the White House was also hosting a Pride Month celebration. “I want you to know that, as your president, all of us on this stage have your back.”

Biden’s move is a direct response to the over 300 anti-LGBTQ + bills that have been introduced in state legislatures this year, many of them specifically targeting transgender youth.

Of those bills, over 20 have become law – including in Florida, home to the recent Parental Rights in Education, aka “Don’t Say Gay” bill, barring some lower-grade classrooms from learning or speaking about the LGBTQ experience. In Alabama, a law prohibits gender-affirming care for young people (although parts of the law are temporarily blocked by a federal judge), while in Texas, Gov. Greg Abbott directed the state’s child welfare agency to criminally investigate parents who allow their children to access gender-affirming services, referring to them as child abusers (although a federal judge has temporarily blocked such investigations). Several other states have seen wide restrictions of trans youth’s participation in school sports.

In essence, Biden’s order will advise US states on how to take the opposite approach by offering alternative solutions and to expand federal resources for the LGBTQ community.

According to a White House fact sheet, the order instructs the Department of Health and Human Services (HHS) to release new sample policies for states on how to expand access to health care, including gender-affirming care, for LGBTQI + people. It also addresses the disproportionate suicide rates among queer youth by directing HHS to expand its suicide prevention resources.

Furthermore, the order directs the Department of Education to address the impact of laws affecting students and to prepare a sample school policy on how to achieve inclusive education. It will also encourage HHS to strengthen nondiscrimination protections in the foster care system, with plans on helping to prevent homelessness and improve access to federal programs.

The order also strives to do everything in the federal government’s power to put an end to so-called conversion therapy by directing HHS to clarify that federally funded programs cannot offer the harmful, discredited practice. As noted in the fact sheet, “Biden is also encouraging the Federal Trade Commission to consider whether the practice constitutes an unfair or deceptive act or practice, and whether to issue consumer warnings or notices.” He is also working to expand support for conversion therapy survivors.

What is conversion therapy?

The practice has been denounced not only by the American Psychological Association but also by the American Psychiatric Association as well as by the American Academy of Child & Adolescent Psychology, which asserted that conversion therapy lacks “scientific credibility and clinical utility” and noted that “there is evidence that such interventions are harmful “and” should not be part of any behavioral health treatment of children and adolescents. “

There are 22 states and four territories with no laws or policies relating to conversion therapy, according to the LGBTQ Movement Advancement Project (MAP), a nonprofit think tank providing rigorous research on the rights and freedoms of queer people. Three states have preventive measures keeping them from enforcing conversion therapy bans. Meanwhile, 20 states (plus Washington, DC) have banned conversion therapy for minors, while five other states have partial bans for minors.

Mathew Shurka, a 34-year-old anti-conversion therapy activist who endured the “treatment” from the age of 16 to 21, was in Washington, DC, when Biden signed the order. He says the president’s action has been a long time coming.

“I believe the impact on this is going to be enormous,” says Shurka, who heads up the Born Perfect campaign in partnership with the National Center for Lesbian Rights (NCLR) that aims to end conversion therapy and who has helped craft many of the key points in Biden’s order. “We know that there are hundreds of thousands of LGBTQ people in the United States today who’ve gone through conversion therapy – and spent a lot of money doing it. The government is finally taking a position to protect them.”

When Shurka was in conversion therapy, he tells Yahoo Life that “there was not a single elected official I was aware of who spoke highly of LGBTQ youth, or [who said] that they should be protected from such things. If you’re a teenager, in today’s world, the entire federal government has taken a really strong position to protect your safety. I think it will have a massive impact. “

Shurka says it’s important to note that the order doesn’t just benefit individuals but also families as a whole. “The families of survivors also suffer,” he says, adding that he hopes this clear message of conversion therapy being an illegitimate practice will deter families from seeking it out.

The practice has widely been called fraudulent (a designation of a bill that would amend the Federal Trade Commission Act aims to make law). As a teenager, Shurka says his family spent “tens of thousands” of dollars to try and change his sexuality through conversion therapy after his parents received bad advice from “licensed therapists” who claimed they would be able to turn kids straight “within six weeks . “

“For my father, this was like music to his ears,” he recalls.

But what he says wound up happening instead were six years of mental and physical abuse by older male therapists, who he claims put him through invasive exercises and psychotherapy sessions in an attempt to “cure” his homosexuality. That involved forcing him to make friends with other straight guys at school while also limiting all interactions with women in his life (including his mother and sisters). They also pressured him to have sexual encounters with girls, he says. At one point, Shurka alleges, a male doctor gave him Viagra so that he could “perform” when he had sexual contact with women, all of which made his mental health symptoms worse.

“‘Nothing’s working,'” he recalls thinking at that time. “As time went on, my depression grew. I became suicidal because I knew my attraction was not changing. My attraction for me was only getting stronger. It was becoming more clear to me that this is who I am.”

Shurka has since used his experience to fight to end the abusive practices of conversion therapy, having led staunch campaign efforts with the NCLR. Together, they’ve helped 20 states pass conversion therapy bans for minors by licensed professionals; an additional 100 laws have passed at the local level.

“It’s been incredible,” he says, noting that the fight isn’t over yet. “There’s an international push that is happening all around the world [to ban conversion therapy by law]. Looking at what the US was able to do, they may be able to replicate that – or even go further. “

Following the news of Biden’s order, a long list of activists and LGBTQ organizations appear to be sharing Shurka’s optimism, with many taking to Twitter to praise the president for his move:

Want lifestyle and wellness news delivered to your inbox? Sign up here for Yahoo Life’s newsletter.