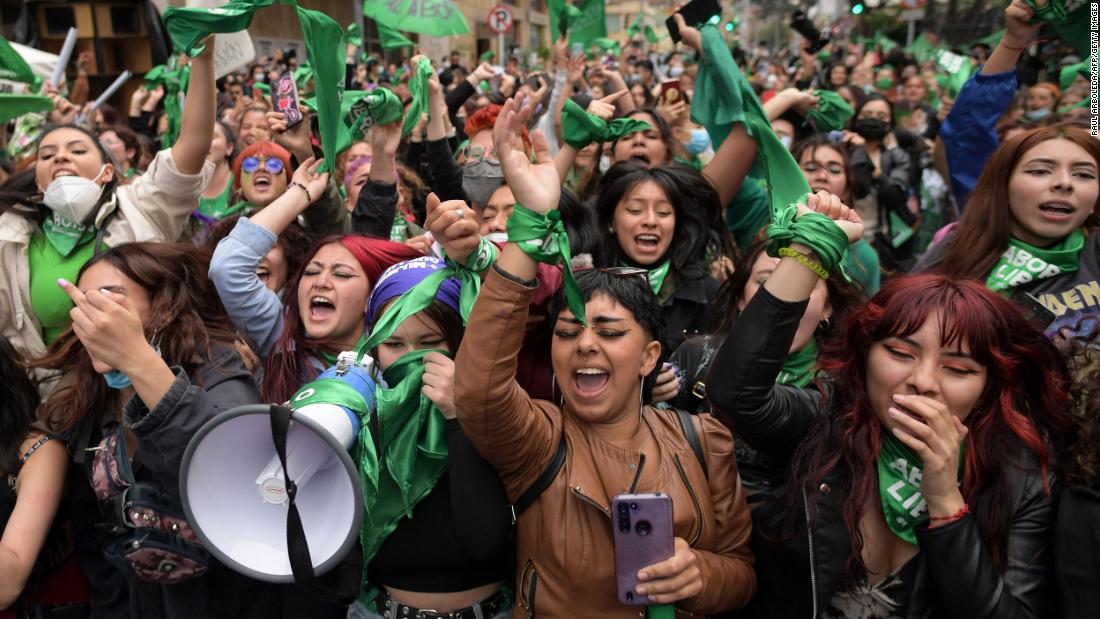 This is not the United States, or at least it wasn’t until nationwide demonstrations earlier this month. It is Argentina. And Mexico. And Chile. My nation of origin, Colombia, now has the most liberal abortion laws in the Americas outside of Canada. And even in difficult contexts, it could also be the Dominican Republic or El Salvador, which in recent years have seen mass protests against harsh abortion bans and some prison sentences reversed.

As a lawyer and women’s health organizer who has worked across Latin America, I helped organize the “green wave” which began in Argentina in the early 2000s, gaining national momentum in 2018, and ushering in groundbreaking legislation protecting health and bodily autonomy for generations of people across the region. Many thought these reforms would never happen, especially in nations where religion and the church are often a final arbiter on law and justice.

Now I am one of millions of American citizens grappling with the leaked draft opinion from the US Supreme Court that would overturn Roe v. Wade. There are some painful truths we must face: As the legal right to abortion looks to become a thing of the past, what lies ahead is a future with likely more cases of forced births, unsafe abortions and entirely preventable deaths.

But the future is not lost.

In late February, the Constitutional Court in my home country of Colombia decriminalized abortion up to the 24th week of pregnancy, after which there are four exceptions to avoid criminalization: when the life and health of the mother is at risk, when pregnancy is the result of rape or incest, when the pregnancy is unviable and when it is the result of forced insemination.

Colombia became the third Latin American country to decriminalize abortion in the last two years, joining Argentina (up to the 14th week) and Mexico in recognizing bodily autonomy as a human right. (Although in Mexico the implementation of the ruling is up to each state, with only eight out of 32 so far having passed the laws, all of them with a limit set to the 12th week).

This wave of change is happening in some of the world’s most Catholic countries and, particularly in the cases of Mexico and Colombia, it demonstrates how ultimately the court justices found penalizing abortion to be unconstitutional – in other words, they interpreted the law accordingly with the constitution, not religious or personal beliefs.

That said, Evangelicals have been shown to be more conservative than Catholics in many aspects, including abortion. And in those countries where Evangelicals are the primary force, such as Honduras, Guatemala and even Brazil, progress seems less likely.

The Colombia ruling would not be possible without the human rights organizations on the ground that put political pressure on the court justices. They hammered home, through regular street protests, both national and international news stories and social media what we’ve always known to be true: The abortion exceptions system fails pregnant people and disproportionately impacts the most vulnerable.
Back in 2006, Colombia’s Constitutional Court had ruled that pregnant women can access safe and legal abortion services in cases of fatal fetal impairments, when pregnancy poses health or life risks or when pregnancy is the result of rape, incest or forced insemination. This ruling was so restrictive and vague, it barely made a dent in ensuring access to abortion.

When the Court decided to revise Colombia’s abortion laws in 2021, human rights lawyers and lawyers like myself knew highlighting the discriminatory nature of the laws was how we could sway the judges and ultimately change hearts and minds.

This involved finding and sharing the personal and painful stories of women who were denied their legal right to abortion. We needed to prove that the implementation of the 2006 court ruling reinforced that abortion was a privilege for the rich, not a right.

We set the record straight on exactly who was being denied abortion care for the Colombian justices. Reporting from Profamilia, a private non-profit that promotes sexual and reproductive rights in Colombia, made headlines showing that, in 2020 alone, more than 30,000 women in Colombia were denied their right to legal abortion.
These women were then forced to choose between clandestine abortions or continuing their pregnancies. And the reality is 132,000 women and girls suffer complications from unsafe abortions each year in Colombia, according to Human Rights Watch, citing the Ministry of Health figures.
In other words, the restrictive abortion laws resulted in a public health emergency. Moreover, we conducted that the thousands denied safe abortion services each year were almost exclusively the most marginalized: minors, rape survivors, immigrants, refugees, women living in rural areas and those in poverty.

The Court justices could not avoid what we shed light on: that the abortion laws created both a public health burden and a class system. People with means will always be able to access health care whereas those without can’t. The Constitutional Court of Colombia was left with no choice but to level the playing field and decriminalize abortion once and for all because we implemented the laws were failing the most marginalized that Colombia has a duty to protect.

American citizens who believe in the right to legal abortion can still push back against the Supreme Court’s impending ruling – in fact, we need everybody who cares about human and civil rights and bodily autonomy to get involved.

Abortion funds and states codifying Roe v. Wade are undeniably crucial to the survival of so many, but they can only do so much. Voter participation will be critical, but we need to learn from Colombia, Argentina, Mexico and elsewhere to pressure our elected officials to protect our health and our humanity.

Seeing abortion to become legal in Latin American countries is something we once thought impossible. As we gear up for the fight we now have in store in the US, we bring the learnings from our home countries, and our signature color green, to the country we call home today.

As recent nationwide demonstrations have shown, we are taking to the streets to fight like hell for bodily autonomy – and we ask that you join us.