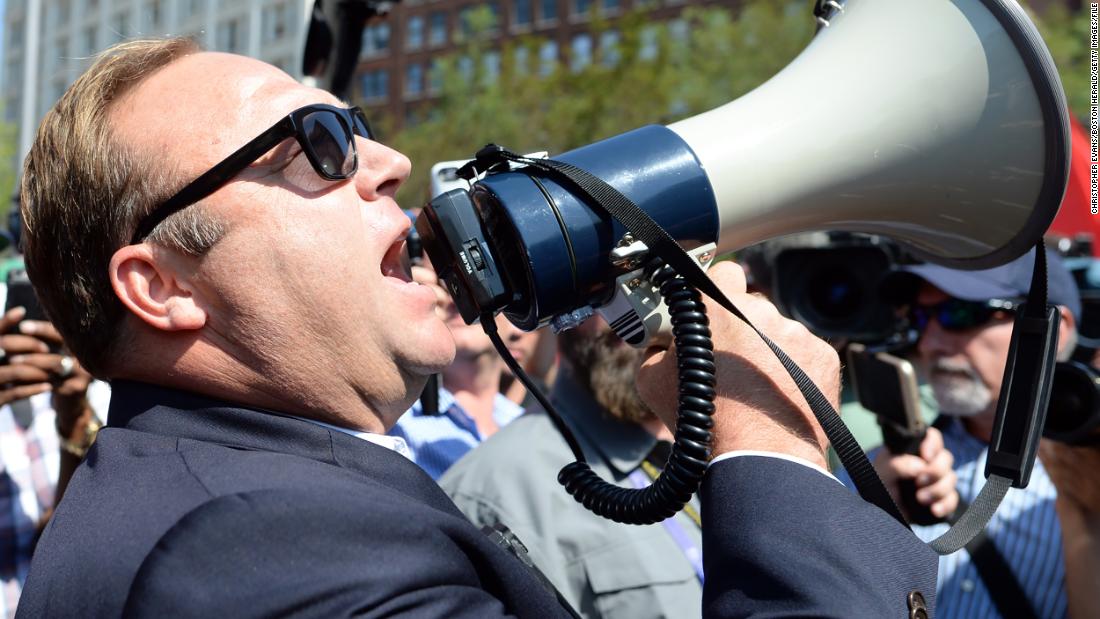 The first time I witnessed Jones face-to-face with his supporters was in Dallas in 2013, when we were standing in Dealey Plaza by the grassy knoll – the birthplace of one of the biggest conspiracy theories of all time. It was the 50th anniversary of President John F. Kennedy’s assassination, and the city planned to commemorate the day with an official ceremony. Jones had organized a rally to protest the memorial. When we arrived, the crowd rushed over to greet Jones. In their chaotic fervor, a few young men shoved me aside, ignoring the camera perched on my shoulder. “He’s with me,” Jones said as he reached through the horde, grabbed my raincoat and pulled me back into the fold.
As time went on, Jones’ popularity flourished, and the crowds grew larger and more frenzied. At the 2016 Republican National Convention in Cleveland, Jones hired security to accompany him. When he arrived at a pro-Trump event, dubbed the “America First” rally, the crowd erupted in adulation. Many of the attendees wore Infowars t-shirts and a few had holstered guns at their sides. Jones took the stage and began proselytizing to his flock. “If you think the awakening we’ve seen so far is big,” he shouted into a microphone, “this planet and the globalists haven’t seen anything yet.” I stood nearby, watching through the camera on my phone, live-streaming the speech to Jones’ Facebook page as his supporters began chanting, “Hillary for prison!”
It’s been about five years since I came to my senses and quit working for Jones. During that time, I watched from the sidelines as he began to face a reckoning for decades of callous, harmful behavior. He was booted from multiple social media platforms, including Twitter, Facebook, Instagram, Spotify and YouTube. He was sued by the families of victims of the 2012 mass shooting at Sandy Hook Elementary School for repeatedly claiming it was a “giant hoax,” and has since lost both cases in Connecticut and Texas by default. He was also subpoenaed by and met with the House select committee to answer for his alleged role in the January 6 insurrection.
Meanwhile, I spent that time coming to terms with my own complicity, trying to understand through therapy and self-examination why I’d once been so willing to believe the madness. I wrote publicly about some of my experiences for a piece in The New York Times Magazine. I was deposed by lawyers representing the Sandy Hook families in the Connecticut case. I spoke to journalists, writers and filmmakers, hoping to provide context and clarity to the inner workings of Jones’ conspiracy machine. But it felt like the negative effects of my past far outweighed my futile attempts to make amends. The damage had been done.

While I had escaped Jones’ world, fragments of the country continued to look alarmingly similar. In the wake of the coronavirus pandemic, as powerlessness gave way to fear, it became apparent that the same ethos that fueled Jones for decades had become ubiquitous.

According to a survey conducted by the Pew Research Center during the early days of the pandemic, nearly half of US adults said they had seen at least some seemingly made-up news related to the coronavirus. Another Pew study revealed that more than 70% of Americans had heard the conspiracy theory that the pandemic was intentionally planned by powerful people – and 25% believed it was probably or definitely true.

I don’t blame individuals for being skeptical of institutional power, and I understand that simple answers are preferential to uncertainty. When I first started listening to Jones in 2008, at age 19, I fell into that alluring trap. I believed that vaccines were potentially dangerous, that fluoride in the drinking water lowered IQ levels, that Monsanto was creating genetically modified foods that led to higher rates of cancer and illness, and that an ultra-rich, clandestine group was behind it all in order to keep the population sick and servile.

But over time – as I stood behind a camera and watched Jones ignore, conflate, misrepresent and fabricate information – my critical thinking skills improved. Unfortunately, my education in media literacy came from learning how to circumvent it in others. I learned the difference between causation and correlation. I started paying attention to the source, the context and the medium of online content. I didn’t understand the importance of editorial processes and journalistic integrity until I saw firsthand how easily misinformation was weaponized to garner attention and exploit fear. But more than anything, the catalyst that shifted my perspective was my long-time partner, Lacey. She consistently pushed me to question my actions, to develop clear principles and to become more empathetic. If I didn’t have someone close to me – a compassionate, intelligent person who cultivated a safe space for open communication – I don’t think I would’ve been able to endure the slow, painful, all-consuming internal erosion that resulted in personal growth and edification.

While it may be comforting to think Jones’ excommunication from social media has rendered him irrelevant, the reality is that Jones has spent years building his own platform and cultivating a devoted following. Though it might be more difficult for Jones to reach new people, he has an endless capacity for reinvention and a knack for redirecting the collective focus onto himself. For now, as reactionary media continues to embolden the worst in their listeners, and opportunists like Jones prey on the ignorant and vulnerable, conspiracy theories, and those who adhere to them, aren’t going away anytime soon.

The last time I saw Jones in person was at a rally in downtown Austin. It was nearly three years after I quit, when a vocal minority – funded by right-wing donors – began staging “reopen America” ​​protests throughout the country. Jones and his crew, always looking for new avenues to draw attention to themselves, joined in and organized rallies at the Texas State Capitol. Their first protest took place on April 18, 2020, and since I lived nearby, I decided to make my way downtown.

As I watched from a distance, a mask tightly fitted to my face, protesters gathered around Jones. “This is the 21st century war,” he shouted into a megaphone. The protesters cheered with wide-eyed enthusiasm as colorful signs fluttered in the air: “We are not prisoners; Rebellion is essential; Freedom is greater than safety.” Even a few children held placards reading, “Down with corona-panic,” and “Shutdown the shutdown.”

As I watched the protesters – most of them without protective masks – I thought back to the years I spent behind a camera. Had any of these people watched the videos I filmed, the reports I edited, the lies I helped disseminate? Had they fallen victim to Jones’ impassioned rants, discovered a deep-seated prejudice in his hate-filled rhetoric? Was Trump to blame for emboldening Jones and his ideas during the 2016 election, or the media for not recognizing his influence sooner? I wanted to go up to the protesters and tell them I understood their fear, their anger. I wanted, somehow, to convey that there was freedom in acknowledging you didn’t have all the answers, strength in admitting you were wrong. But I didn’t think it would mean anything coming from a stranger, so I kept quiet.

Having conversations with conspiracy theorists can be frustrating, especially if you are not well acquainted with the people you’re taking to. Paper-thin arguments often give way to accusatory anger when challenged. But maybe that’s the only way to help turn the tide. If we know someone who is drawn to absurd ideas, perhaps the responsibility falls on all of us to, at the very least, speak to one another. I have to believe there’s value in constructive confrontation and attempting to reason with the unreasonable, because it worked for me.

At the rally, Jones’ voice cut through the applause. “God bless you all for standing in defiance of this tyranny,” he said. “Choose freedom, choose America, not fear, not propaganda.” As the crowd cheered, oblivious to the irony of Jones advocating the rejection of fear, I made eye contact with a man standing nearby. “Can you believe this?” he asked with a grin, whistling and waving a sign reading, “Give me liberty or give me death.”

“Yes,” I said, nodding from behind my mask, wondering if he understood the implications of the words hoisted above his head, “Unfortunately, I can.” His smile faded as I turned to walk away. Jones began chanting “Texas!” and then “USA!” as the crowd followed suit, many of them wide-eyed, watching, as I once had, through the cameras on their phones.