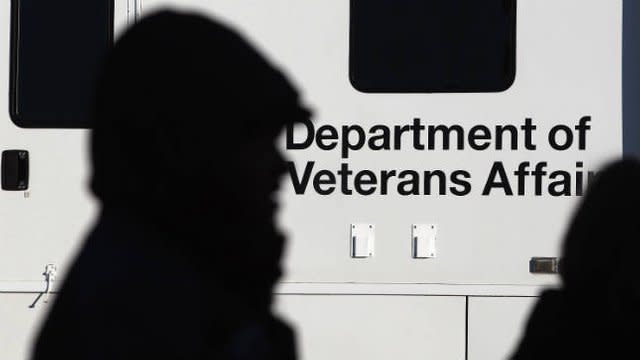 Sgt. First Class Heath Robinson deployed to Iraq and Kosovo with the Ohio National Guard, but the battle did not end when he returned home.

After returning to Ohio, Robinson experienced gushy nosebleeds and bleeding from his ear caused by a rare autoimmune disease.

In 2017, he was diagnosed with Stage 4 lung cancer that his oncologist said only could have been caused by prolonged toxic exposure.

Despite these health issues, Robinson’s family was unable to get caregiver benefits from the Department of Veterans Affairs (VA) because they couldn’t prove that his illness was caused by his military service.

Robinson’s mother-in-law, Susan Zeier, stood alongside lawmakers and advocates at a press event in Washington this past week and explained the tiring ordeal of taking care of Heath before he died of his cancer in 2020. Robinson’s ailments included spontaneous vomiting while his nose bleeds, all of which made it difficult for him to breathe.

“Needless to say, Heath spent his final three years battling the war that followed him home,” Zeier said. “He told us that he is a soldier and soldiers don’t know how to give up.”

Two years after Robinson’s death, Congress is poised to pass legislation in his honor to help millions of veterans like him.

The Senate is set to vote this week on the Sgt. First Class Heath Robinson Honoring our PACT Act to expand healthcare and other benefits for a new generation of veterans who have been exposed to toxic chemicals. The bill would greatly benefit those who served after 9/11 and were exposed to toxic substances during that time.

Advocates are hailing it as a major step for helping these individuals, but some say more needs to be done to address past and ongoing exposures to toxic substances in the military.

“Every generation of veterans unfortunately has had some kind of exposure issue,” Morosky added. “There has not yet been any sort of comprehensive legislation passed to address that for the post-9/11 generation.”

The bill, which passed a procedural vote in the Senate in an 86-12 vote last week, would expand eligibility for Veterans Affairs health care for post-9/11 combat veterans, including those exposed to toxic chemicals.

A version of the bill has also passed the House in a 256-174 vote, but the Senate version differs slightly so it will need to be approved by the House again if the Senate approves it. President Biden is expected to sign the legislation if it reaches his desk.

The legislation would also add 23 conditions related to burn pit and toxic exposures to the VA’s list of service presumptions – meaning that veterans who have these conditions will not need to prove that they are connected to their service in order to make claims for disability payments.

It would also create a framework for creating future presumptions, which includes allowing the public to weigh in on proposed presumptions.

It would not cover newer veterans, although the measure does expand eligibility for veterans who were exposed to Agent Orange, a pesticide that the military used during the Vietnam War. Agent Orange has been linked to bladder cancer, hypothyroidism and Parkinson’s Disease.

Shane Liermann, deputy national legislative director at the Disabled American Veterans advocacy group, praised the bill while saying that more can be done.

“This is a great first step, this really is, because it’s going to put some onus on the VA to make sure things are getting addressed in order for them to be considered a presumptive disease,” Liermann said.

But, he said the legislation could go even further, and that there should be specific timeline requirements for the VA to act on exposure presumptions.

Many of the toxic exposures impacting soldiers who returned from the wars in Iraq and Afghanistan are related to burn pits – large heaps of trash that are set on fire to dispose of the military’s waste.

Exposure to these pits has been linked to asthma, sinusitis, and rare forms of cancers. But it can take years for the conditions to develop.

Biden has connected burn pit exposure to the 2015 death of his son Beau from brain cancer.

Veteran Andrew Myatt, who has leukemia, told The Hill that he believes his own illness was caused by burn pit exposure in Iraq.

He said that he personally does not expect to benefit from the legislation because he has good insurance from his current job, but he believes it would help others.

“I had five bone marrow biopsies, eight spinal taps, ten transfusions… three years of multiple types of chemo,” Myatt said. “The amount of stuff they put you through to try to combat this is not cheap in any way shape or form. If I didn’t have good health care and survived, I would be in debt for the rest of my life. ”

While the use of burn pits is no longer widespread, military personnel are exposed to other toxins such as cancer-linked per- and polyfluoroalkyl substances (PFAS).

Uses for PFAS, also known as forever chemicals because they don’t break down over time in the environment or human body, include military firefighting foam, although this is expected to be phased out by October 2024.

Defense Department spokesperson Peter Hughes said via email that the Pentagon “continues its work toward a replacement for firefighting foam containing PFAS” and in the meantime has been switched to formulations that contain lower amounts of the substances. He added that it’s only used in emergencies unless it can be completely contained.

Scott Faber, senior vice president of government affairs at the Environmental Working Group, said that while he’s pleased to see Congress taking action to help past victims of toxic exposures, both Congress and the military need to do more to prevent them from happening and clean them ref.

“I wish there was as much bipartisan support for protecting service members from the ongoing risks posed by toxic chemicals… as there is for ensuring that servicemembers get the health care they deserve,” he said.

Meanwhile, Hughes said the department “remains committed to the health and safety of our Service Members, their families, the DoD Civilian Workforce, and the communities in which the DoD serves” and spends about $ 1.5B on cleanup annually.