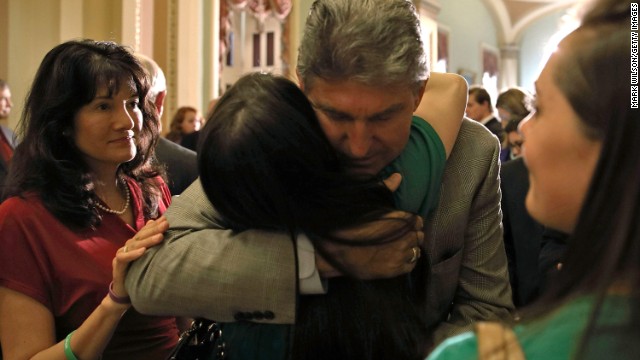 Now, with a bipartisan group of senators again talking about gun control following a mass school shooting in Uvalde, Texas, it’s worth re-examining what happened back in 2013 for clues as to whether the Senate might act (and how they might act) this time around.

Following the assassination of 26 people – including 20 children – on December 14, 2012, then-President Barack Obama pledged to offer meaningful reforms on guns in America.

“This is our first task as a society: keeping our children safe,” Obama said in unveiling a plan that included both executive actions and legislative proposals in January 2013. “This is how we will be judged, and their voices should compel us to change. ” He added of his proposals: “In the days ahead, I intend to use whatever weight this office holds to make them a reality.”
Obama’s push on guns was wide-reaching. His plan’s most high-profile elements were a background check requirement for all gun sales, a reinstatement of the assault weapons ban that had lapsed in 2004, a limitation of ammunition magazines to 10 rounds and a ban on armor-piercing bullets.

At the heart of that proposal was a requirement that guns purchased at gun shows and via the internet be subject to background checks. It would also have prohibited any individual listed in the National Instant Criminal Background Check System from purchasing a firearm. (Read this terrific PolitiFact breakdown to understand exactly what Manchin-Toomey would have done.)
That proposal, which was widely considered by both parties as the best chance to win the support of at least 60 senators, came up for a vote on April 17, 2013. The vote broke down this way:

* 46 nays, including 41 Republicans and five Democrats. The Democrats who voted against the compromise were Montana Sen. Max Baucus, Alaska Sen. Mark Begich, North Dakota Sen. Heidi Heitkamp, ​​Arkansas Sen. Mark Pryor and Nevada Sen. Harry Reid. (Reid, the majority leader of the Senate at the time, voted against the measure to preserve his ability to bring it up again at a later date.)

(Sidebar: That same day, a series of other gun control measures failed, including one that would have regulated assault weapons; it received only 40 “yea” votes.)
Obama was enraged by the failures. “Instead of supporting this compromise, the gun lobby and its allies willfully lied about the bill,” he said at the time, adding that it was a “pretty shameful day for Washington.”

Looking back, what can we learn about the chances for some sort of gun control measure passing the Senate following Uvalde?

Well, first and foremost, it depends on what is in the legislation – which we don’t know yet as the bipartisan talks have just started.

But it’s clear that the Senate hasn’t grown significantly more pro-gun control in the ensuing decade since Manchin-Toomey failed.

Of the five Democrats who voted against the measure, four have since been replaced by Republicans. (Reid’s seat is now held by Democratic Sen. Catherine Cortez Masto, who faces a difficult reelection bid this fall.) Of that Senate Republicans quartet – Steve Daines of Montana, Dan Sullivan of Alaska, Kevin Cramer of North Dakota and Tom Cotton of Arkansas – all have either an A + or A rating from the National Rifle Association.

If anything, then, it might be marginally more difficult to get through a proposal like Manchin-Toomey in this current iteration of the Senate. And with Manchin opposed to changing the rules around the filibuster legislation, it seems unlikely anything that goes as far as Manchin-Toomey (or farther) will make it through this Senate.