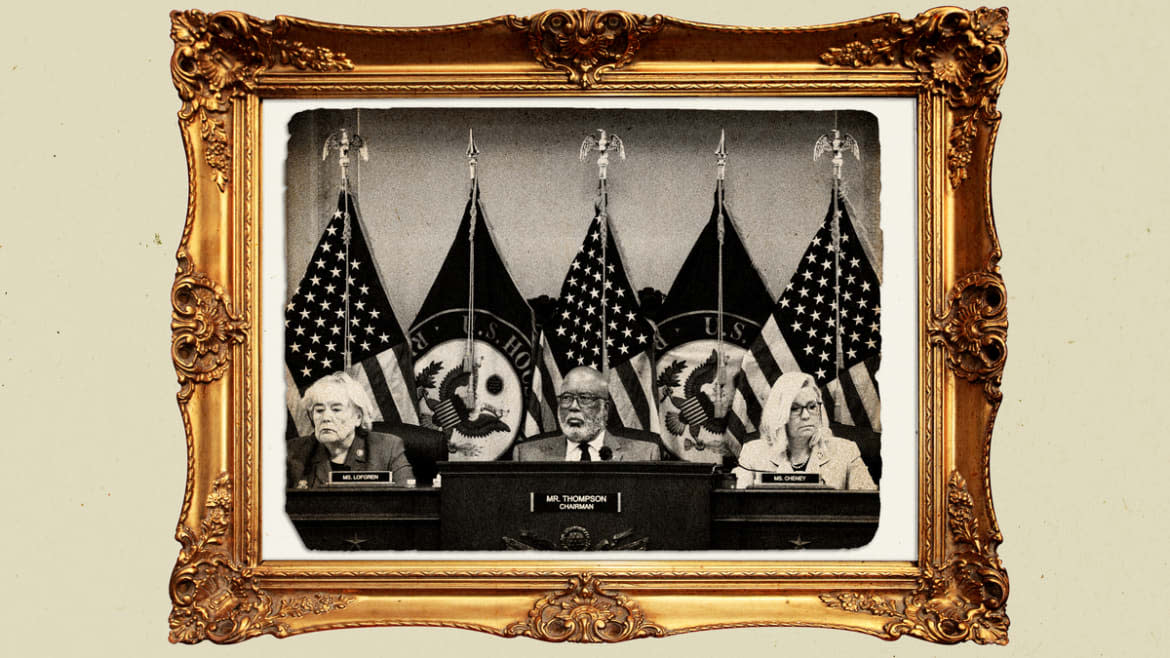 The Jan. 6 Committee hearings will not move the needle of public opinion even one inch in 2022. But should this country ever recover from its present state of constant anxiety and hysterical tumult, there’s a chance the evidence produced at these hearings will be of tremendous value to future generations.

Democrats, to various degrees, see the hearings as the last, best attempt to hold former President Donald Trump accountable for inciting the Jan. 6 assault on the Capitol.

Republicans who believe in reality — which includes acceptance that Joe Biden won the 2020 election and that Trump absolutely did incite a mob to stop the Senate from certifying its results — don’t support the hearings, which they see as a cynical distraction from inflation, various culture war obsessions, and President Biden’s supposed senility. Then there’s the majority of Republicans who still believe Trump’s unhinged lies about the election and, thus, think the hearings are a political witch hunt.

And let’s not forget the critics of various political stripes, who while supposedly trying to hover above partisanship have dismissed Democrats’ “obsession” with litigating Jan. 6 as silly because, after all, a ragtag group of QAnoners and random Trumpists was never truly going to take down the Republic.

But that completely misses the point of the hearings, which very well might be misnamed. That’s because they’re not laser-focused on just Jan. 6 but, rather, on Trump’s Big Lie itself.

These hearings are about a president’s coup attempt that began before Jan. 6 and continues to this day. The riot was just the most public, viscerally mortifying embodiment of that coup attempt. And it’s crucial to document exactly how this all happened for posterity.

Judging only from what we’ve seen in the first few days, the committee has already entered into the historical record an astounding collection of evidence and testimony.

Remember, this is the very first time a president violated the American norm of accepting a peaceful transfer of power. And even today (and probably for the rest of his life) that same president continues to poison the minds of his followers with falsehoods that make him appear “detached from reality,” as Trump’s former attorney general and loyal attack dog, Bill Barr, testified before the committee.

Put simply: Trump said long before the election that he would not accept a losing result as legitimate. Then he lost, refused to accept the results, propagated outrageous lies about voter fraud, tried to strongarm Republican state election officials into falsifying election results, incited a mob that sacked the Capitol to try to stop the Senate’s certification of the election, left office without conceding defeat, and continues to attack American democracy by demanding any Republican opposed to his coup attempt be purged from the party.

It is well worth the effort to make that case to the public. Even if people are largely indifferent to the Jan. 6 hearings today should this country’s democracy survive into future generations, they’ll care about the rock-solid evidence that was laid bare during the hearings.

The committee has been painstakingly making its case through unimpeachable video and audio evidence, plus first-person eyewitness testimony, that definitively shows how Trump spreads false conspiracy theories, shunned the members of his inner circle who tried to make him listen to reason and accept that he lost (aka “Team Normal,” and elevated elevated the voices of only the most batshit-deranged among them. These included Rudy Giuliani, who loyal Trumpists said appeared drunk on Election Night, and Sidney Powell, who testified under oath in a defamation lawsuit against her that “no reasonable person” should have taken her statements about election fraud seriously.

The committee has also shown how far-right groups like the Proud Boys and the Oath Keepers coordinated well in advance of Jan. 6, and believed they were taking orders from the president himself. The new video documentation of the Jan. 6 attack on the Capitol, placed in context with Trump’s speech at the “Stop the Steal” rally on the ellipse, shows just how savage the violence was and how lucky the country was to have avoided a direct confrontation between the mob and two of its primary targets: Vice President Mike Pence and House Speaker Nancy Pelosi. (And we haven’t even gotten to the part of the hearings that will detail how Trump intimidated state election officials in an attempt to have them join his coup attempt.)

And for all the conventional wisdom that “no one cares” about these hearings, TV ratings for the first Jan. 6 session outdrew the Day 1 hearings for both of Trump’s impeachments, and nearly doubled the NBA Finals game airing that same night. Maybe Americans care about Trump’s assault on democracy, after all!

This could be credited to the fact that, unlike some past hearings— I’m thinking in particular about Rep. Adam Schiff’s interminable grandstanding during Trump’s first impeachment trial, in particular — Reps. Bennie Thompson and Liz Cheney aren’t making long-winded speeches or testing out their dramatic range. They’re explaining what you’ll see, showing it, reiterating its importance, and moving on to the next thing. It’s simple, and it’s effective.

The hearings are sober, matter of fact, and mercifully cut up into brief, digestible chunks. Any American can, if they so choose, sit, watch, and make up their own minds.

While some people will never be shaken of their blind faith, I can’t imagine a reasonable person watching Bill Barr mercilessly eviscerate Trump’s “bullshit” claims of election fraud — which were encapsulated in the absurd documentary 2000 Mules—And coming away thinking, “That ex-AG is a Deep State traitor, Trump’s telling the truth!”

Likewise, this country should ever find itself in a slightly less insane political and cultural state, long after the cult of Trump has faded from the scene — these hearings will serve as a time capsule of a crime committed against the nation.

In this best-case scenario utopia of my imagination, Republicans of future generations will look at their elders with incredibleulity and shame that they participated in such a despicable scam — or if they weren’t active participants in the attempted coup, that they were so determined to hold onto power that they did everything possible to keep Trump and his co-conspirators from being held accountable.

If Trump’s attempt to steal the presidency should have taught us anything, it’s that the grand American experiment can’t be counted on to survive on autopilot. It takes vigilance and a dogged commitment to defending our basic ideals.

As Ben Franklin (probably) famously said, “A republic, if you can keep it.”